The Mother of the American Flag

You may know the Founding Fathers like George Washington, Benjamin Franklin, and Alexander Hamilton. And everyone recognizes the Stars and Stripes. But do you know Betsy Ross, the woman who made the American flag? The Betsy Ross House in Philadelphia, PA, provides a look at this remarkable woman.

Lisa Acker Moulder, the Betsy Ross House Director, says, “She has been referred to as ‘the Mother of the Flag,’ but she has an interesting story beyond the making of the flag, which is what we try to highlight here.” 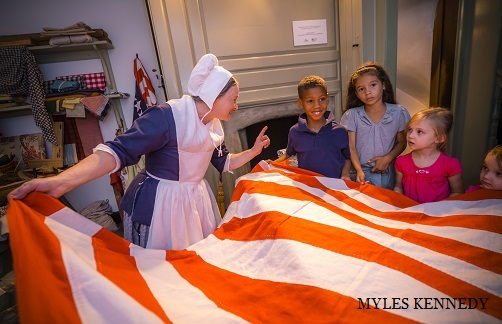 A young upholsterer, Betsy Ross was an ordinary, working-class woman. She made and repaired curtains, bedcovers, tablecloths, and other housewares. The story goes that George Washington himself had once commissioned her to make curtains for his Mount Vernon home, and two years later, in 1776, he approached her again to make the first version of the American flag. She is said to have responded, “I do not know, but I will try.” On June 14, 1777, Congress adopted her creation as the official national flag, and history was made.

Although she created such an iconic symbol, she was not well-known in her lifetime. A Quaker, she was a very humble person and did not like to brag. However, Moulder says, “She was very proud that Washington came to her not only to decorate his home but to do the important task of making the flag.” She would tell the story to her children and grandchildren, and in 1870 her grandson, William Canby, felt it was important for people to know her story. He made a speech to the Historical Society of Philadelphia, relaying the events and making her a hero in Philadelphia. But it wasn’t until C.H. Weisgerber’s 1893 painting, The Birth of Our Nation’s Flag, which portrays a life-sized image of Betsy Ross with the flag, that she become known to the rest of the nation.

Despite now being such a major American figure, the Betsy Ross House remains a humble place; the home of a working-class woman. “What makes us different from other house museums is that most are the homes of wealthy, powerful white men in a rural area.” Moulder says such people are hard to relate to, which is why the Betsy Ross stands out. “We’re so unique in that we’re one of the few house museums that focus on a working-class home. You really get a sense of what your life would have been like 250 years ago.”

The house is furnished with simple furniture befitting the period and even has an upholstery shop. “We have the only working colonial upholstery shop in the country,” she says. On any given day, you can find one of the Betsy Ross interpreters in there, working on the flag or a pair of curtains, and interact with her. About 90% of the interpreters are trained actors, and Moulder says that’s by design. “Other historic houses or museums typically hire history buffs; we hire actors and actresses.” She says that’s because actors give better interactions while talking to guests, and while you can teach an actor history, acting is its own unique skill. 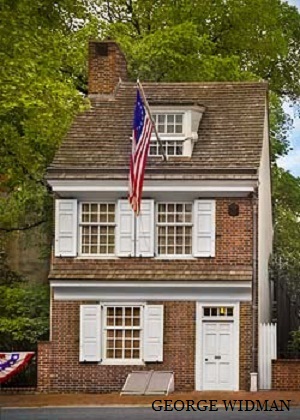 The house itself is designed to be as interactive as possible. The interpreters will invite you to assist in the upholstery shop, the kitchen smells of chocolate (which was a popular beverage at a time when patriots were boycotting tea), and the children’s version of the audio tour is a scavenger hunt. Moulder herself is very passionate about making the place as open as possible. Before she took charge, the rooms were blocked off by plexiglass barriers that, while protecting the rooms and shop, made things hard to see and much less interactive. Her first act as Director was to remove them, which made for a more enjoyable experience. “The first week after removing the glass, I asked the Betsy Ross interpreter how it was going and she said, ‘We have a major problem; people don’t want to leave the room!’ We had to teach them exit lines to encourage the guests to move along.”

The problem with a house focused on such an ordinary woman is that people don’t always accept her story as fact. “There are still people who don’t want to believe that Betsy Ross made the first American flag.” She says that people claim Washington couldn’t have possibly known her, and there are no official documents asking her to make it. But Moulder says that’s untrue, as the people at Mount Vernon discovered an entry in his ledger detailing his request for curtains, and that he paid her quite a bit of money to do so. “We were really excited because we had something to tell those naysayers that George Washington had known Betsy Ross and told her ‘Hey you’re great at sewing; how about you make the American flag?’”

That’s the real lesson of the house; how something remarkable came from an average person. “Something we like to say here is ‘Was Betsy Ross ordinary or extraordinary?’ and we leave that for the guests to interpret.” With its working-class furnishings, interpreters, and interactive experience, the Betsy Ross House works to drive home that not all great things come from the rich and famous, and that you might accomplish something special without even realizing it. “The lesson there is that you may think you’re doing something ordinary, but in the future people might find that what you were doing was extraordinary.”